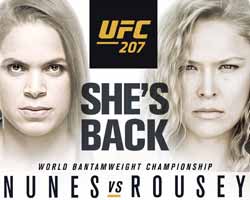 Review by AllTheBestFights.com: 2016-12-30, nice and tough exchanges between Ronda Rousey and Amanda Nunes: it is close to get four stars (UFC Performance of the Night).

The black belt in Brazilian jiu-jitsu and current Ufc women’s Bw champion Amanda Nunes entered this fight with a professional mma record of 13-4-0 (92% finishing rate) and she is ranked as the No.1 women’s bantamweight in the world. She suffered her last loss when she faced Cat Zingano in 2014 (=Zingano vs Nunes), since then she has fought four times beating Valentina Shevchenko (=Nunes vs Shevchenko) and Miesha Tate in 2016 (=Tate vs Nunes).
Her opponent, the black belt in judo and former Strikeforce and Ufc women’s Bw champion Ronda Rousey, has an official record of 12-1-0 (100% finishing rate) but she is not ranked as ‘Rowdy’ hasn’t fought since November 15, 2015 when she suffered her first and only loss against Holly Holm (=Rousey vs Holm). Before this bout, in 2015, Rousey had won over Bethe Correia (=Rousey vs Correia) and Cat Zingano (=Rousey vs Zingano). Nunes vs Rousey, main event of UFC 207, is valid for the Ufc women’s bantamweight title (Nunes’ first defense). Watch the video and rate this fight!