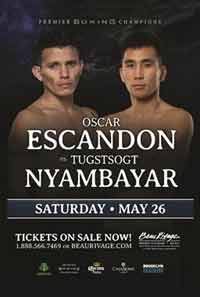 Review by AllTheBestFights.com: 2018-05-26, good fight between Tugstsogt Nyambayar and Oscar Escandon: it gets three stars.

The undefeated former Olympian Tugstsogt Nyambayar entered this fight with a perfect boxing record of 9-0-0 (8 KOs=89%) and he is ranked as the No.23 featherweight in the world. He fought twice last year winning over Jhon Gemino and Harmonito Dela Torre.
His opponent, the former Olympian and former interim champion in two weight classes Oscar Escandon, has a record of 25-3-0 (17 knockouts) but he is not ranked as he hasn’t fought since May 20, 2017 when he was defeated by Gary Russell Jr (Gary Russell Jr vs Oscar Escandon); before this bout, in 2016, he had beat Robinson Castellanos (Robinson Castellanos vs Oscar Escandon). Nyambayar vs Escandon is on the undercard of Eddie Ramirez vs Argenis Mendez. Watch the video and rate this fight!