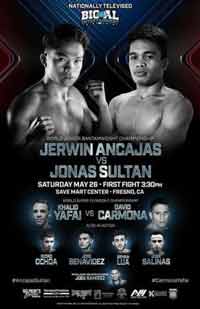 Review by AllTheBestFights.com: 2018-05-26, nice exchanges between Khalid Yafai and David Carmona: it gets three stars.

The undefeated former Olympian and Wba super-Flw champion Khalid Yafai entered this fight with a perfect boxing record of 23-0-0 (14 knockouts) and he is ranked as the No.3 super flyweight in the world (currently the #1 in this division is Srisaket Sor Rungvisai). Kal fought twice last year winning over Suguru Muranaka (Yafai vs Muranaka) and Sho Ishida (Khalid Yafai vs Sho Ishida).
His opponent, David Carmona, has an official record of 21-5-5 (9 knockouts) and he entered as the No.37 bantamweight but he lost three out of his last four bouts, against Naoya Inoue (Inoue vs Carmona), Carlos Cuadras (Cuadras vs Carmona) and Daniel Lozano (David Carmona vs Daniel Lozano 2); after this bout he came back to win with Jesus Iribe in 2018. Yafai vs Carmona is on the undercard of Jerwin Ancajas vs Jonas Sultan. Watch the video and rate this fight!