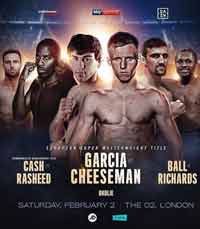 Review by AllTheBestFights.com: 2019-02-02, disappointing fight between Lawrence Okolie and Tamas Lodi: it gets two stars.

The undefeated Olympian Lawrence Okolie entered this fight with a perfect record of 10-0-0 (7 knockouts) and he is ranked as the No.8 cruiserweight in the world (currently the #1 in this division is Oleksandr Usyk). He debuted in 2017 and he has beat Isaac Chamberlain, Luke Watkins (Luke Watkins vs Lawrence Okolie) and Matty Askin in his last three (Matty Askin vs Lawrence Okolie).
His opponent, Tamas Lodi, has an official record of 20-11-2 (17 KOs=85%) and he entered as the No.116 in the same weight class. He fought three times last year beating Sami Enbom and Laszlo Ondrejcsik but between these two bouts he lost to Bilal Laggoune. Okolie vs Lodi is valid for the WBA Continental cruiserweight title; undercard of Sergio Garcia vs Ted Cheeseman. Watch the video and rate this fight!