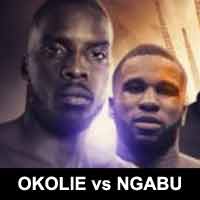 Review by AllTheBestFights.com: 2019-10-26, too much holding and too many interruptions between Lawrence Okolie and Yves Ngabu: it gets two stars.

Both undefeated , the former Olympian Lawrence Okolie entered this fight with a perfect record of 13-0-0 (10 KOs=77%) and he is ranked as the No.6 cruiserweight in the world (currently the #1 in this division is Mairis Briedis) while his opponent, Yves Ngabu, has a boxing record of 20-0-0 (14 knockouts) and he entered as the No.12 in the same weight class. In their last three fights Okolie has won over Tama Lodi (Lawrence Okolie vs Tamas Lodi), Wadi Camacho (Lawrence Okolie vs Wadi Camacho) and Mariano Angel Gudino (Lawrence Okolie vs Mariano Angel Gudino) while Ngabu has beat Tamas Lodi, Geoffrey Battelo and Micki Nielsen. Okolie vs Ngabu is valid for the EBU European cruiserweight title; undercard of Regis Prograis vs Josh Taylor. Watch the video and rate this fight!