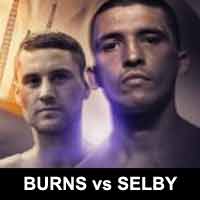 Review by AllTheBestFights.com: 2019-10-26, good fight between Lee Selby and Ricky Burns: it gets three stars.

The former Ibf Fw champion Lee Selby entered this fight with a boxing record of 27-2-0 (9 knockouts) and he is ranked as the No.4 lightweight in the world (currently the #1 in this division is Vasyl Lomachenko). He lost to Josh Warrington last year (Lee Selby vs Josh Warrington) but he came back to win against Omar Douglas in 2019 (Lee Selby vs Omar Douglas).
His opponent, Ricky Burns, has an official record of 43-7-1 (16 knockouts) and he entered as the No.20 in the same weight class. He suffered two consecutive defeats in 2017, against Julius Indongo (Burns vs Indongo) and Anthony Crolla (Anthony Crolla vs Ricky Burns) but then he has beat Ivan Njegac and Scott Cardle. Selby vs Burns is on the undercard of Regis Prograis vs Josh Taylor. Watch the video and rate this fight!