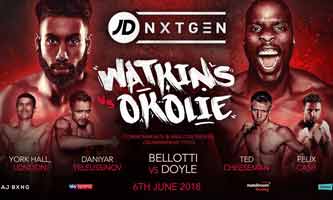 Review by AllTheBestFights.com: 2018-06-06, pretty good finish between Luke Watkins and Lawrence Okolie but it is not enough to get three stars, it gets two.

Both undefeated, the Commonwealth Cw champion Luke Watkins entered this fight with a perfect record of 13-0-0 (9 knockouts) and he is ranked as the No.44 cruiserweight in the world while his opponent, the former Olympian Lawrence Okolie, has a boxing record of 8-0-0 (6 KOs=75%) and he entered as the No.67 in the same weight class. Watkins fought four times last year winning over Jiri Svacina, Ian Tims, Robin Dupre and Mike Stafford while Okolie debuted in 2017 defeating Adam Williams, Antonio Sousa and Isaac Chamberlain in his last three. Watkins vs Okolie is valid for the Commonwealth (British Empire) and WBA Continental cruiserweight titles. Watch the video and rate this fight!

(Free embeddable video hosted on Dailymotion and not uploaded by AllTheBestFights)
https://www.dailymotion.com/video/x6l8lv8