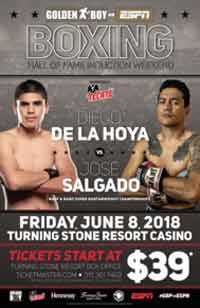 The undefeated cousin of Oscar De La Hoya Diego De La Hoya entered this fight with a perfect boxing record of 20-0-0 (9 knockouts) and he is ranked as the No.9 super bantamweight in the world (currently the #1 in this division is Luis Nery). He fought four times last year winning over Roberto Pucheta, Erik Ruiz, Alan Isaias Luques Castillo and Randy Caballero (Diego De La Hoya vs Randy Caballero).
His opponent, Jose Salgado, has an official record of 36-4-2 (29 KOs=81%) and he entered as the No.74 in the same weight class. He lost to Javier Gallo last year but he came back to win in 2018 with Alberto Cupido. De La Hoya vs Salgado is valid for the NABF and WBO NABO super bantamweight titles. Watch the video and rate this fight!