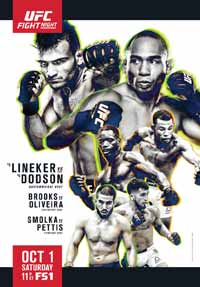 Review by AllTheBestFights.com: 2016-10-01, fight not so exciting between Will Brooks and Alex Oliveira: it gets two stars.

The former Bellator Lw champion Will Brooks entered this fight with a pro mma record of 18-1-0 (50% finishing rate) and he is ranked as the No.4 lightweight in the world (currently the #1 in this division is Eddie Alvarez). He suffered his only defeat when he faced Saad Awad in 2013 (=Brooks vs Awad), after this bout he has won nine consecutive fights taking revenge on Awad (=Brooks vs Awad 2) and beating Ross Pearson in his Ufc debut (=Brooks vs Pearson).
His opponent, Alex Oliveira, has a record of 14-4-1 (79% finishing rate) and he entered as the No.56 welterweight. ‘Cowboy’ Oliveira has already fought twice in 2016 losing to Donald Cerrone (=Cerrone vs Oliveira) and defeating James Moontasri. Brooks vs Oliveira is on the undercard of John Lineker vs John Dodson – UFC Fight Night 96. Watch the video and rate this fight!

Result: Click here to show the fight’s result
Alex Oliveira def. Will Brooks (TKO at 3:30, round 3)

Brooks’ next fight: Will Brooks vs Charles Oliveira