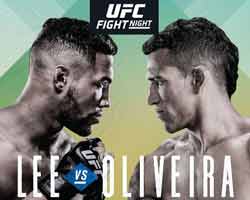 Review by AllTheBestFights.com: 2020-03-14, great fight between Kevin Lee and Charles Oliveira: it gets three stars (UFC Performance of the Night).

Kevin Lee entered this fight with a professional mma record of 18-5-0 (61% finishing rate) and he is ranked as the No.6 lightweight in the world (currently the #1 in this division is Khabib Nurmagomedov). He suffered two consecutive losses between 2018 and 2019, against Al Iaquinta (Kevin Lee vs Al Iaquinta 2) and Rafael dos Anjos (Rafael dos Anjos vs Kevin Lee), but then he has beat Gregor Gillespie (Kevin Lee vs Gregor Gillespie).
His opponent, the black belt in Brazilian jiu-jitsu Charles Oliveira, has an official record of 28-8-0 (93% finishing rate) and he entered as the No.8 in the same weight class. ‘Do Bronx’ Oliveira was defeated by Paul Felder in 2017 (Charles Oliveira vs Paul Felder), but then he has won six bouts beating Nik Lentz (Charles Oliveira vs Nik Lentz 3) and Jared Gordon in his last two (Charles Oliveira vs Jared Gordon). Lee vs Oliveira is the main event of the UFC Fight Night 170. Watch the video and rate this fight!