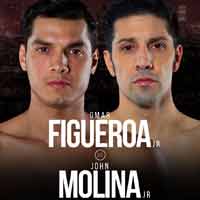 Review by AllTheBestFights.com: 2019-02-16, some good exchanges between Omar Figueroa Jr and John Molina Jr but it is not enough to get three stars: it gets two.

The undefeated former Wbc Lw champion Omar Figueroa entered this fight with a pro record of 27-0-1 (19 knockouts) but he is not ranked as he hasn’t fought since July 15, 2017 when he defeated Robert Guerrero (4-stars fight, Omar Figueroa vs Robert Guerrero). The only man who stopped him in a draw was Arturo Quintero in 2010, since then he has won 17 consecutive bouts.
His opponent, John Molina Jr, has an official boxing record of 30-7-0 (24 KOs=80%) but he is also not ranked because he hasn’t fought for more than one year; he lost to Terence Crawford in 2016 (Terence Crawford vs John Molina Jr) but then he beat Ivan Redkach in 2017 (John Molina Jr vs Ivan Redkach). Figueroa vs Molina is on the undercard of Leo Santa Cruz vs Rafael Rivera. Watch the video and rate this fight!