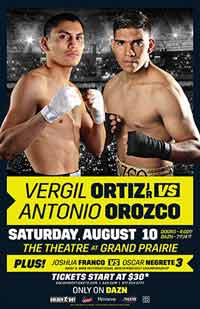 Review by AllTheBestFights.com: 2019-08-10, great fight between Antonio Orozco and Vergil Ortiz Jr: it gets three stars.

Antonio Orozco entered this fight with a boxing record of 28-1-0 (17 knockouts) and he is ranked as the No.20 super lightweight in the world. He suffered his only loss when he faced Jose Carlos Ramirez last year (4-stars fight, Jose Carlos Ramirez vs Antonio Orozco) but he came back to win against Jose Luis Rodriguez in 2019.
His opponent, the undefeated Vergil Ortiz Jr, has a perfect record of 13-0-0 (13 KOs=100%) and he entered as the No.51 in the same weight class. In his last three fights he has won over Roberto Ortiz, Jesus A Valdez Barrayan and Mauricio Herrera. Orozco vs Ortiz is the main event of the evening. Watch the video and rate this fight!