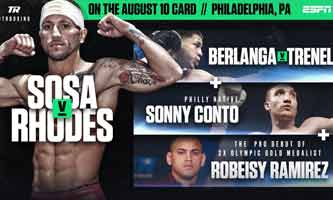 Review by AllTheBestFights.com: 2019-08-10, some good exchanges between Jason Sosa and Haskell Lydell Rhodes but it is not enough to get three stars: it gets two.

The former Wba super-Fw champion Jason Sosa entered this fight with a pro boxing record of 22-3-4 (15 knockouts) and he is ranked as the No.16 super featherweight in the world. He lost two consecutive bouts in 2017, against Vasyl Lomachenko (Lomachenko vs Sosa) and Yuriorkis Gamboa (controversial majority decision, Jason Sosa vs Yuriorkis Gamboa) but then he has beat Reynaldo Blanco and Moises Delgadillo.
His opponent, Haskell Lydell Rhodes, has a record of 27-3-1 (13 knockouts) and he entered as the No.214 welterweight. He fought three times last year defeating Mike Fowler and Demetrius Wilson but between these two fights he lost to Omar Douglas. Sosa vs Rhodes is the main event of the evening (on the original fight card the main event was Carl Frampton vs Emmanuel Dominguez but Carl withdrew from the bout due to injury). Watch the video and rate this fight!