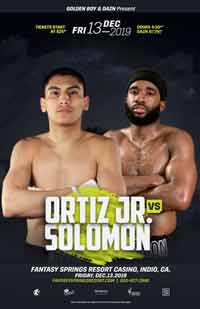 Review by AllTheBestFights.com: 2019-12-13, some good exchanges between Vergil Ortiz Jr and Brad Solomon but it is not enough to get three stars: it gets two.

The undefeated Vergil Ortiz Jr entered this fight with a perfect boxing record of 14-0-0 (14 KOs=100%) and he is ranked as the No.22 welterweight in the world. In his last three fights he has won over Jesus A Valdez Barrayan, Mauricio Herrera and Antonio Orozco (Antonio Orozco vs Vergil Ortiz Jr).
His opponent, Brad Solomon, has a record of 28-1-0 (9 knockouts) and he entered as the No.85 in the same weight class. He lost to Konstantin Ponomarev in 2016 (via split decision) but then he has beat David Bency and Paddy Gallagher. Ortiz vs Solomon is valid for the WBA Gold welterweight title. Watch the video and rate this fight!