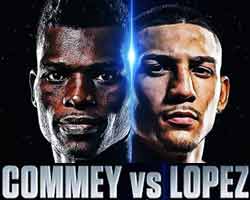 Review by AllTheBestFights.com: 2019-12-14, pretty good fight between Richard Commey and Teofimo Lopez: it gets three stars.

The Ibf Lw champion Richard Commey entered this fight with a pro record of 29-2-0 (26 KOs=90%) and he is ranked as the No.2 lightweight in the world (currently the #1 in this division is Vasyl Lomachenko). He lost two consecutive fights in 2016, both via split decision, against Robert Easter Jr (Robert Easter Jr vs Richard Commey) and Denis Shafikov (Denis Shafikov vs Richard Commey) but then he has won five bouts defeating Isa Chaniev (Richard Commey vs Isa Chaniev) and Raymundo Beltran in his last two (Richard Commey vs Raymundo Beltran).
His opponent, the undefeated former Olympian Teofimo Lopez, has a perfect boxing record of 14-0-0 (11 KOs=79%) and he entered as the No.4 in the same weight class. In his last three bouts he has won over Diego Magdaleno (Teofimo Lopez vs Diego Magdaleno), Edis Tatli (Teofimo Lopez vs Edis Tatli) and Masayoshi Nakatani (Teofimo Lopez vs Masayoshi Nakatani). Commey vs Lopez is valid for the IBF World lightweight title (Commey’s second defense); undercard of Terence Crawford vs Egidijus Kavaliauskas. Watch the video and rate this fight!