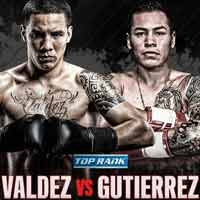 Review by AllTheBestFights.com: 2019-11-30, good performance by both boxers: Oscar Valdez vs Adam Lopez get three stars.

The former Olympian and Wbo Fw champion Oscar Valdez entered this fight with a perfect boxing record of 26-0-0 (20 KOs=77%) and he is ranked as the No.4 featherweight in the world (currently the #1 in this division is Josh Warrington). In his last three bouts he has defeated Scott Quigg (Oscar Valdez vs Scott Quigg), Carmine Tommasone (Oscar Valdez vs Carmine Tommasone) and Jason Sanchez (Oscar Valdez vs Jason Sanchez).
His opponent, Adam Lopez (who replaces Andres Gutierrez) has an official record of 13-1-0 (6 knockouts) and he entered as the No.67 in the same weight class. He lost to Stephen Fulton in 2017 but since then he has won five consecutive fights defeating Aldimar Silva and Jean Carlos Rivera in 2019. Valdez vs Lopez, WBC super featherweight title eliminator. Watch the video and rate this fight!