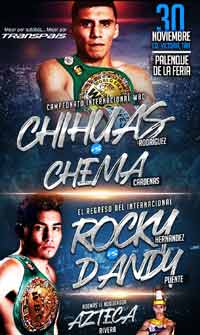 The former Wbo and Ibf minimumweight champion Francisco Rodriguez Jr entered this fight with a record of 32-4-1 (23 knockouts) and he is ranked as the No.9 super flyweight in the world (currently the #1 in this division is Juan Francisco Estrada). ‘Chihuas’ Rodriguez lost to Moises Fuentes in 2015 (Rodriguez vs Fuentes) but since then he has won 13 consecutive bouts beating David Barreto (Francisco Rodriguez Jr vs David Barreto) and William Riera in his last two (Francisco Rodriguez Jr vs William Riera).
His opponent, Jose Maria Cardenas, has a boxing record of 17-5-0 (14 KOs=82%) and he entered as the No.46 bantamweight but he won just one out of his last four fights, against Antonio Vargas in May 2019; after this bout ‘Chema’ Cardenas has lost to Carlos Cuadras. Rodriguez vs Cardenas is the main event of the evening. Watch the video and rate this fight!