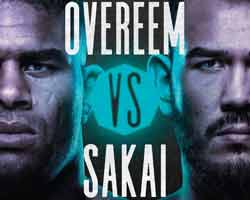 Review by AllTheBestFights.com: 2020-09-05, pretty good fight between Alistair Overeem and Augusto Sakai: it gets three stars.
The former K-1, Strikeforce and Dream world champion Alistair Overeem entered this fight with a professional mma record of 46-18-0 (89% finishing rate) and he is ranked as the No.6 heavyweight in the world (currently the #1 in this division is Stipe Miocic). He lost to Jairzinho Rozenstruik last year (Alistair Overeem vs Jairzinho Rozenstruik) but he comes back to win against Walt Harris in 2020 (Alistair Overeem vs Walt Harris).
His opponent, Augusto Sakai, has an official record of 15-1-1 (73% ko/tko victory rate – he has never won via submission) and he entered as the No.13 in the same weight class. He suffered his only loss when he faced Cheick Kongo in 2017 (via split decision, Cheick Kongo vs Augusto Sakai), after this bout he has won six consecutive fights beating Andrei Arlovski (Andrei Arlovski vs Augusto Sakai), Marcin Tybura and Blagoy Ivanov in his last three (Blagoy Ivanov vs Augusto Sakai). Sakai vs Overeem is the main event of the UFC Fight Night 176 (also known as UFC Vegas 9). Watch the video and rate this fight!