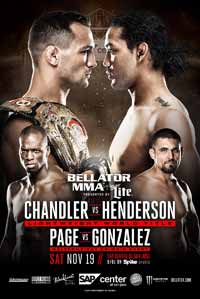 Review by AllTheBestFights.com: 2016-11-19, boring fight between Michael Page and Fernando Gonzalez: it gets one star!

The undefeated Michael Page entered this fight with a perfect mma record of 11-0-0 (91% finishing rate) and he is ranked as the No.64 welterweight in the world. He has fought twice in 2016 winning over Jeremie Holloway (=Page vs Holloway) and Evangelista ‘Cyborg’ Santos (4-stars-fight, Page vs Cyborg Santos).
His opponent, Fernando Gonzalez, has an official record of 25-13-0 (64% finishing rate) and he entered as the No.37 in the same weight class. He suffered two consecutive losses between 2013 and 2014, against Max Griffin and David Mitchell, but then he has collected five victories beating Gilbert Smith in 2016 (=Gonzalez vs Smith). ‘Venom’ Page vs Gonzalez is on the undercard of Michael Chandler vs Benson Henderson – Bellator 165. Watch the video and rate this fight!

Video: (Free embeddable video hosted on Youtube and not uploaded by AllTheBestFights, to report it please visit this link where the video is hosted)
https://www.youtube.com/watch?v=M8-MfeSlnCs