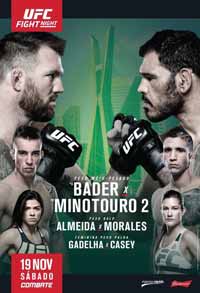 Thomas Almeida entered this fight with a pro record of 20-1-0 (95% finishing rate) and he is ranked as the No.28 bantamweight in the world while his opponent, the undefeated Albert Morales, has an official record of 6-0-1 (83% finishing rate). Both fighters have been stopped in their last bout: Almeida has lost to Cody Garbrandt (=Almeida vs Garbrandt) while Morales has drawn with Alejandro Perez. ‘Thominhas’ Almeida vs Morales is on the undercard of Ryan Bader vs Antonio Rogerio Nogueira 2 – UFC Fight Night 100. Watch the video and rate this fight!