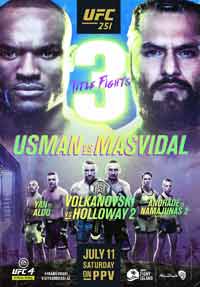 Review by AllTheBestFights.com: 2020-07-12, disappointing fight between Zhalgas Zhumagulov and Raulian Paiva: it gets two stars.
Zhalgas Zhumagulov entered this fight with a pro mma record of 13-3-0 (54% finishing rate) and he is ranked as the No.9 flyweight in the world (currently the #1 in this division is Deiveson Figueiredo). He was defeated by Vartan Asatryan in 2017, but then he has won over Shaj Haque, Tyson Nam (Tyson Nam vs Zhalgas Zhumagulov), Tagir Ulanbekov (Zhalgas Zhumagulov vs Tagir Ulanbekov) and Ali Bagautinov (Ali Bagautinov vs Zhalgas Zhumagulov).
His opponent, Raulian Paiva, has a record of 19-3-0 (37% finishing rate) and he entered as the No.33 in the same weight class. He fought and lost twice last year, against Kai Kara-France and Rogerio Bontorin, but he came back to win with Mark De La Rosa in 2020. Zhumagulov vs Paiva is on the undercard of Kamaru Usman vs Jorge Masvidal – UFC 251. Watch the video and rate this fight!