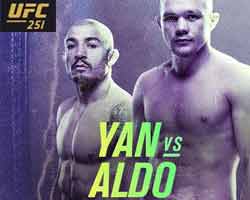 Review by AllTheBestFights.com: 2020-07-12, good exchanges between Petr Yan and Jose Aldo: it gets three stars.
Petr Yan entered this fight with a professional record of 14-1-0 (50% finishing rate) and he is ranked as the No.4 bantamweight in the world (currently the #1 in this division is Marlon Moraes). He suffered his only loss when he faced Magomed Magomedov in 2016 (via split decision), since then he has won nine consecutive bouts taking revenge on Magomedov in 2017 and defeating John Dodson (John Dodson vs Petr Yan), Jimmie Rivera (Petr Yan vs Jimmie Rivera) and Urijah Faber in his last three (Petr Yan vs Urijah Faber).
His opponent, the black belt in Brazilian jiu-jitsu and former Ufc Fw champion Jose Aldo, has an official record of 28-6-0 (64% finishing rate) and he entered as the No.3 in the same weight class but he comes off two consecutive losses, against Alexander Volkanovski (Jose Aldo vs Alexander Volkanovski) and Marlon Moraes (Marlon Moraes vs Jose Aldo); before these fights, ‘Scarface’ Aldo had beat Renato Moicano Carneiro (Jose Aldo vs Renato Moicano Carneiro). Yan vs Aldo is valid for the vacant Ufc bantamweight title; undercard of Kamaru Usman vs Jorge Masvidal – UFC 251. Watch the video and rate this fight!