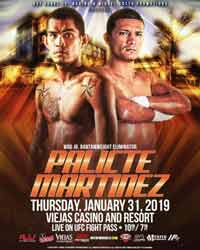 Review by AllTheBestFights.com: 2019-01-31, fight not so exciting between Aston Palicte and Jose Martinez: it gets two stars.

Aston Palicte entered this fight with a professional boxing record of 24-2-1 (20 KOs=83%) and he is ranked as the No.9 super flyweight in the world (currently the #1 in this division is Srisaket Sor Rungvisai). He lost to Junior Granados in 2016 (via split decision) but then he has collected four victories and one draw, against Donnie Nietes in his last one (Donnie Nietes vs Aston Palicte).
His opponent, the undefeated Jose Martinez, has an official record of 20-0-2 (13 knockouts) and he entered as the No.28 in the same weight class. He had beat Miguel Robles and Jesus Martinez in 2017 but then he tied with Alejandro Santiago Barrios in 2018. Palicte vs Martinez is the main event of the evening. Watch the video and rate this fight!