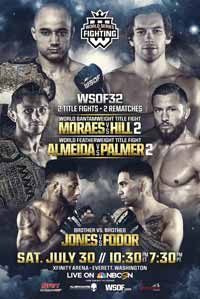 Review by AllTheBestFights.com: 2016-07-30, disappointing fight between Alexandre Almeida and Lance Palmer: it gets two stars.

The Wsof Fw champion Alexandre Almeida entered this fight with a pro mma record of 18-5-0 (83% finishing rate) and he is ranked as the No.27 featherweight in the world while his opponent, the former Wsof Fw champion Lance Palmer, has a record of 10-2-0 (60% submission victory rate – he has never won via ko/tko) and he entered as the No.30 in the same weight class. In their first and previous bout Almeida beat Palmer via unanimous decision. ‘Capitao’ Almeida vs Palmer 2 is valid for the WSOF featherweight title (Almeida’s first defense); undercard of Marlon Moraes vs Josh Hill 2 – WSOF 32. Watch the video and rate this fight!