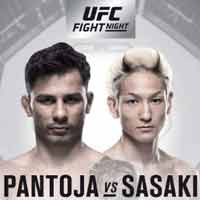 Review by AllTheBestFights.com: 2018-11-17, nice grappling exchanges between Alexandre Pantoja and Yuta Sasaki: it gets three stars.

Alexandre Pantoja entered this fight with a professional mma record of 19-3-0 (68% finishing rate) and he is ranked as the No.9 flyweight in the world (currently the #1 in this division is Henry Cejudo). He has already fought twice in 2018 losing to Dustin Ortiz (Dustin Ortiz vs Alexandre Pantoja) and beating Brandon Moreno (Brandon Moreno vs Alexandre Pantoja).
His opponent, Yuta Sasaki, has an official record of 21-5-2 (67% finishing rate) and he entered as the No.21 in the same weight class. He was defeated by Jussier Formiga da Silva last year (Jussier Formiga da Silva vs Yuta Sasaki) but he come back to win against Jenel Lausa in 2018. Pantoja vs Sasaki is on the undercard of Neil Magny vs Santiago Ponzinibbio – UFC Fight Night 140. Watch the video and rate this fight!