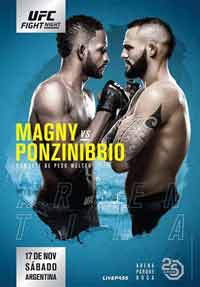 Review by AllTheBestFights.com: 2018-11-17, pretty good finish between Cezar Ferreira and Ian Heinisch but it is not enough to get three stars: it gets two.

The black belt in Brazilian jiu-jitsu and Tuf Brazil tournament winner Cezar Ferreira entered this fight with a record of 13-6-0 (54% finishing rate) and he is ranked as the No.33 middleweight in the world. ‘Mutante’ Ferreira lost to Elias Theodorou last year (Ferreira vs Theodorou) but then he has won over Nate Marquardt (Cezar Ferreira vs Nate Marquardt) and Karl Roberson.
His opponent, Ian Heinisch, has an official mma record of 11-1-0 (55% finishing rate) and he entered as the No.87 in the same weight class. He suffered his only loss when he faced Markus Perez in 2017, after this fight he has beat Daniel Madrid, Gabriel Checco and Justin Sumter. Ferreira vs Heinisch is on the undercard of Neil Magny vs Santiago Ponzinibbio – UFC Fight Night 140. Watch the video and rate this fight!