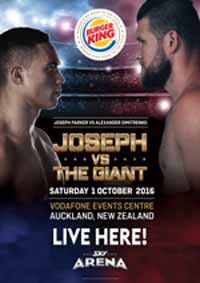 Review by AllTheBestFights.com: 2016-10-01, some good exchanges but with a disappointing finish: Joseph Parker vs Alexander Dimitrenko gets two stars.

The undefeated Joseph Parker entered this fight with a perfect boxing record of 20-0-0 (17 KOs=85%) and he is ranked as the No.8 heavyweight in the world (currently the #1 in this division is Tyson Fury). He has already fought three times in 2016 winning over Jason Bergman (=Parker vs Bergman), Carlos Takam (=Parker vs Takam) and Solomon Haumono (=Parker vs Haumono).
His opponent, Alexander Dimitrenko, has an official record of 38-2-0 (24 knockouts) and he entered as the No.47 in the same weight class. He suffered his last loss when he faced Kubrat Pulev in 2012 (=Pulev vs Dimitrenko), since then he has won six bouts beating Drazan Janjanin in 2016. Parker vs Dimitrenko is valid for the WBO Oriental heavyweight title. Watch the video and rate this fight!