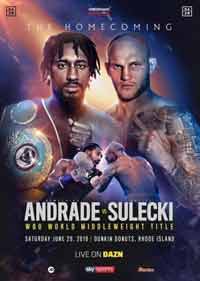 Review by AllTheBestFights.com: 2019-06-29, one sided fight between Joseph Parker and Alex Leapai: it gets two stars.

The former Wbo Hw champion Joseph Parker entered this fight with a boxing record of 25-2-0 (19 knockouts) and he is ranked as the No.10 heavyweight in the world (currently the #1 in this division is Andy Ruiz Jr who suffered his only loss against Parker in 2016, even if it was a controversial decision, Joseph Parker vs Andy Ruiz Jr). He lost two consecutive bouts last year, against Anthony Joshua (Anthony Joshua vs Joseph Parker) and Dillian Whyte (Dillian Whyte vs Joseph Parker) but then he has beat Alexander Flores (Joseph Parker vs Alexander Flores).
His opponent, Alex Leapai, has an official record of 32-7-4 (26 KOs=81%) and he entered as the No.57 in the same weight class. He was defeated by Manuel Charr in 2015 (Manuel Charr vs Alex Leapai) but then he has beat Thomas Peato and Roger Izonritel. Parker vs Leapai is on the undercard of Demetrius Andrade vs Maciej Sulecki. Watch the video and rate this fight!