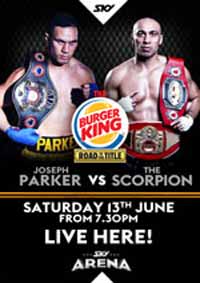 Review by AllTheBestFights.com: 2015-06-13, pretty good fight between Joseph Parker and Yakup Saglam: it gets three stars.

The undefeated Joseph Parker entered this fight with a perfect boxing record of 13-0-0 (11 KOs=85%) and he is ranked as the No.22 heavyweight in the world; he beat Irineu Beato Costa Junior (=Parker vs Beato Costa) and Jason Pettaway in his last two bouts.
His opponent, Yakup Saglam, has an official record of 34-3-0 (31 KOs=91%) and he entered as the No.84 in the same weight class. He suffered his last defeat in 2013 when he faced Odlanier Solis (=Solis vs Saglam), since then he has collected five victories and one no-contest. Parker vs Saglam is valid for the WBO Oriental and PABA heavyweight titles (held by Parker). Watch the video and rate this fight!