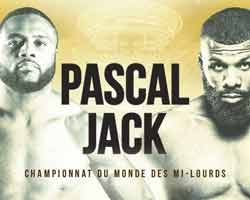 Review by AllTheBestFights.com: 2019-12-28, close fight but not so exciting : Jean Pascal vs Badou Jack gets two stars.

The former Olympian and current WBA light-Hw champ Jean Pascal entered this fight with a boxing record of 34-6-1 (20 knockouts) and he is ranked as the No.9 light heavyweight in the world (currently the #1 in this division is Saul ‘Canelo’ Alvarez). He lost to Dmitry Bivol last year (Dmitry Bivol vs Jean Pascal) but he came back to win against Marcus Browne in 2019 (Marcus Browne vs Jean Pascal).
His opponent, the former Olympian, former Wbc super-Mw and Wba light-Hw champion Badou Jack, has an official record of 22-2-3 (13 knockouts) and he entered as the No.10 in the same weight class but the last time he won was against Nathan Cleverly in 2017 (Nathan Cleverly vs Badou Jack); after this bout he tied with Adonis Stevenson in 2018 (Adonis Stevenson vs Badou Jack) and he has been defeated by Marcus Browne in 2019 (Badou Jack vs Marcus Browne). Pascal vs Jack is valid for the WBA World and WBC Silver light heavyweight titles; undercard of Gervonta Davis vs Yuriorkis Gamboa. Watch the video and rate this fight!