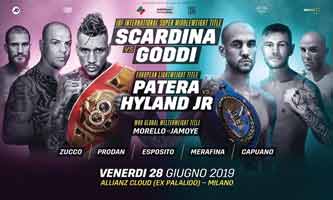 Review by AllTheBestFights.com: 2019-06-28, nice and tough exchanges between Francesco Patera and Paul Hyland Jnr: it gets three stars.

Francesco Patera entered this fight with a boxing record of 21-3-0 (7 knockouts) and he is ranked as the No.19 lightweight in the world. He faced Edis Tatli twice in 2017 winning the first bout but losing the second one; after this fight he has beat Ruben Gouveia, Lewis Ritson (Lewis Ritson vs Francesco Patera) and Marvin Petit.
His opponent, Paul Hyland Jnr, has an official record of 20-1-0 (7 knockouts) and he entered as the No.110 in the same weight class. He also faced Lewis Ritson last year but Hyland lost the fight via tko in the first round (Lewis Ritson vs Paul Hyland Jnr); after this bout he has beat Giovanny Martinez and Miroslav Serban. Patera vs Hyland is valid for the EBU European lightweight title; undercard of Daniele Scardina vs Alessandro Goddi. Watch the video and rate this fight!