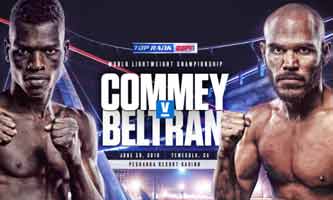 Review by AllTheBestFights.com: 2019-06-28, good fight between Richard Commey and Raymundo Beltran: it gets three stars.

The Ibf Lw champion Richard Commey entered this fight with a professional record of 28-2-0 (25 KOs=89%) and he is ranked as the No.4 lightweight in the world (currently the #1 in this division is Vasyl Lomachenko). He lost two consecutive fights in 2016, both via split decision, against Robert Easter Jr (Robert Easter Jr vs Richard Commey) and Denis Shafikov (Denis Shafikov vs Richard Commey) but then he has won four bouts defeating Yardley Armenta Cruz and Isa Chaniev in his last two (Richard Commey vs Isa Chaniev).
His opponent, the former Wbo Lw champ Raymundo Beltran, has a boxing record of 36-8-1 (22 knockouts) and he entered as the No.8 super lightweight. He was defeated by Jose Pedraza last year (Raymundo Beltran vs Jose Pedraza) but he came back to win in 2019 against Hiroki Okada (Raymundo Beltran vs Hiroki Okada). Commey vs Beltran is valid for the IBF World lightweight title (belt on the line for Commey only since Beltran weighed in 1.8 pounds over the limit). Watch the video and rate this fight!