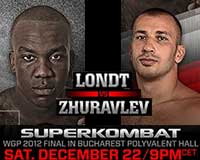 Review: 2012-12-22, the second fight between Ismael Londt and Pavel Zhuravlev was not particularly good: two stars. Ismael Londt (32-3-1) entered as the No.13 heavyweight in the world while Pavel Zhuravlev (41-7-1) entered as the No.7. In their first fight Londt defeated Zhuravlev by split decision (November 19, 2011); this second fight is the final of the SuperKombat WGP 2012 heavwyeight tournament. Watch the video!