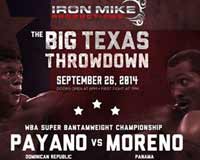 Review: 2014-09-26, fight not particularly good between Anselmo Moreno and Juan Carlos Payano: it gets two stars. Anselmo Moreno entered this fight with a pro boxing record of 35-2-1 (12 knockouts) and he is ranked as the No.7 bantamweight in the world (currently the #1 in this division is Shinsuke Yamanaka); he was beat the last time in 2012 when he faced then-undefeated Abner Mares in a fight valid for the WBC super-Bw title (=Mares vs Moreno), but after this bout he won two consecutive fights: against William Urina, bout valid for Wba Bw belt (=Moreno vs Urina), and then he successfully defended his title against Javier Nicolas Chacon (=Moreno vs Chacon).
His opponent, the undefeated Juan Carlos Payano, has a perfect record of 15-0-0 (8 knockouts) and he entered as the No.56 in the same weight class, he has fought once in 2014 beating German Meraz. Moreno vs Payano is valid for the WBA Super World bantamweight title (first world title shot for Payano). Watch the video and rate this fight!