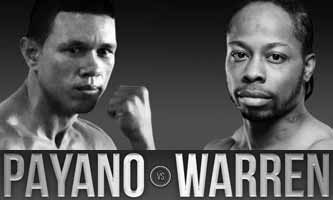 Review by AllTheBestFights.com: 2015-08-02, close fight but with too many interruptions: Juan Carlos Payano vs Rau’shee Warren gets two stars.

Both undefeated, the Dominican Juan Carlos Payano entered this fight with a perfect boxing record of 16-0-0 (8 knockouts) and he is ranked as the No.16 bantamweight in the world while his opponent, the 2007 world amateur boxing champion Rau’shee Warren, has an official record of 13-0-0 (4 knockouts) and he entered as the No.65 in the same weight class. Payano won the WBA Super World Bw title in his last bout, against Anselmo Moreno (=Moreno vs Payano) while Warren defeated Javier Gallo in a non-title bout. Payano vs Warren is valid for the WBA and vacant IBO World bantamweight titles. Watch the video and rate this fight!

Their next fight: Juan Carlos Payano vs Rau’shee Warren 2