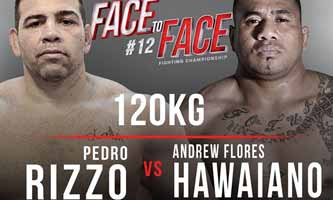 Review by AllTheBestFights.com: 2015-09-12, good fight between Pedro Rizzo and Andrew Flores Smith: it gets three stars.

The black belt in Brazilian jiu-jitsu and former Ufc heavyweight title challenger Pedro Rizzo entered this fight with a professional mma record of 19-11-0 (79% finishing rate) but he is not ranked as he hasn’t fought since May 26, 2013 when he was defeated by Satoshi Ishii (=Rizzo vs Ishii); before this bout he had also lost to Fedor Emelianenko (=Emelianenko vs Rizzo ).
His opponent, Andrew Flores Smith, has an official record of 14-8-0 (79% finishing rate) and he comes off the loss against Johnny Walker (at Peru Fighting Championship 21). Rizzo vs ‘Hawaiano’ Flores Smith is the main event of Face to Face 12. Watch the video and rate this fight!

Better quality video but without audio