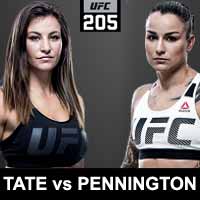 Review by AllTheBestFights.com: 2016-11-12, close fight but not so exciting: Miesha Tate vs Raquel Pennington gets two stars.

The former Strikeforce and Ufc champion Miesha Tate entered this fight with a mma record of 18-6-0 (56% finishing rate) and she is ranked as the No.3 women’s bantamweight in the world. She has fought twice in 2016 beating Holly Holm (=Holm vs Tate) and losing to current #1 Amanda Nunes (=Tate vs Nunes).
Her opponent, Raquel Pennington, has an official record of 8-5-0 (50% finishing rate) and she entered as the No.8 in the same weight class. She was defeated by Holly Holm last year but then she has won three bouts beating Elizabeth Phillips in her last one. Tate vs Pennington is on the undercard of Eddie Alvarez vs Conor McGregor – UFC 205. Watch the video and rate this fight!