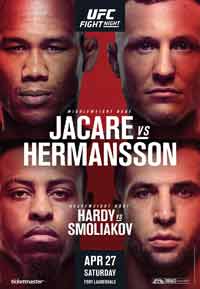 Review by AllTheBestFights.com: 2019-04-27, entertaining fight between Alex Oliveira and Mike Perry: it gets three stars (UFC Fight of the Night).

Alex Oliveira entered this fight with a mma record of 19-6-1 (84% finishing rate) and he is ranked as the No.23 welterweight in the world. He fought three times last year beating Carlos Condit (Carlos Condit vs Alex Oliveira) and Carlo Pedersoli Jr (Alex Oliveira vs Carlo Pedersoli Jr), but then ‘Cowboy’ Oliveira was defeated by Gunnar Nelson (Gunnar Nelson vs Alex Oliveira).
His opponent, Mike Perry, has an official record of 12-4-0 (92% ko/tko victory rate – he has never won via submission) and he entered as the No.30 in the same weight class but he won just one out of his last four bouts, against Paul Felder in July 2018 (Paul Felder vs Mike Perry); after this fight he has lost to Donald Cerrone (Donald Cerrone vs Mike Perry). Oliveira vs Perry is on the undercard of Ronaldo Jacare Souza vs Jack Hermansson – UFC Fight Night 150 (UFC on ESPN+ 8). Watch the video and rate this fight!