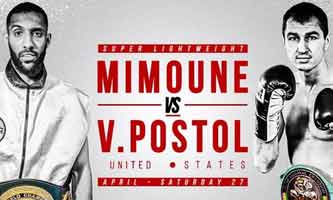 Review by AllTheBestFights.com: 2019-04-27, fight not particularly good between Mohamed Mimoune and Viktor Postol: it gets two stars.

The Ibo super-Lw champion Mohamed Mimoune entered this fight with a boxing record of 21-2-0 (2 knockouts) and he is ranked as the No.7 super-lightweight in the world (currently the #1 in this division is Josh Taylor). He lost to Alexandre Lepelley in 2013 but since then he has collected ten victories defeating Emiliano Dominguez Rodriguez (Mohamed Mimoune vs Emiliano Dominguez Rodriguez) and Franck Petitjean in 2018 (Mohamed Mimoune vs Franck Petitjean).
His opponent, the former Wbc light-Ww champ Viktor Postol, has an official record of 30-2-0 (12 knockouts) and he entered as the No.20 in the same weight class. He also fought twice last year losing with Josh Taylor (Josh Taylor vs Viktor Postol) and beating Siar Ozgul. Mimoune vs Postol, WBC World super lightweight title eliminator, is on the undercard of Robert Easter Jr vs Rances Barthelemy. Watch the video and rate this fight!