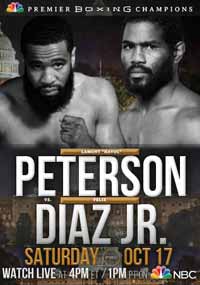 Review by AllTheBestFights.com: 2015-10-17, great performance by both boxers: Lamont Peterson vs Felix Diaz is close to get four stars!

The former Wba and Ibf light-Ww champion Lamont Peterson entered this fight with a pro boxing record of 33-3-1 (17 knockouts) and he is ranked as the No.8 welterweight in the world (currently the #1 in this division is Manny Pacquiao) but he comes off the loss against Danny Garcia (=Garcia vs Peterson).
His opponent, the 2008 Olympic light-Ww gold medalist Felix Diaz, has a perfect record of 17-0-0 (8 knockouts) and he entered as the No.47 in the same weight class; he has fought once in 2015 beating Gabriel Bracero. Peterson vs Diaz is the main event of the evening. Watch the video and rate this fight!