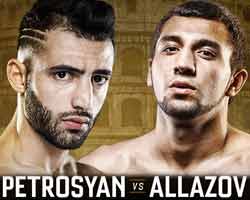 Review by AllTheBestFights.com: 2018-07-14, close fight but not so exciting: Giorgio Petrosyan vs Chingiz Allazov gets two stars.

The former Glory and K-1 World Max champion Giorgio Petrosyan entered this fight with a professional kickboxing record of 87-2-2 (38 knockouts) and he is ranked as the No.3 super welterweight in the world. ‘The Doctor’ Petrosyan suffered his second defeat of his career during the semifinal of the Glory lightweight tournament against Andy Ristie in 2013 (Petrosyan vs Andy Ristie), since then he has won eleven bouts beating Amansio Paraschiv (Petrosyan vs Paraschiv), Crhis Ngimbi (Giorgio Petrosyan vs Chris Ngimbi 2) and Jo Nattawut in his last three (Giorgio Petrosyan vs Jo Nattawut).
His opponent, the former Wako-Pro and current K-1 super-Ww world champion Chingiz Allazov, has an official record of 54-2-0 (34 knockouts) and he entered as the No.5 in the same weight class. ‘Chinga’ Allazov suffered two consecutive losses between 2013 and 2014, against Marat Grigorian (Allazov vs Grigorian) and Sitthichai Sitsongpeenong, but then he has won 28 consecutive bouts beating Sudsakorn Sor Klinmee (Chingiz Allazov vs Sudsakorn Sor Klinmee), Hinata Watanabe (Chingiz Allazov vs Hinata) and Claudiu Badoi in 2018. Petrosyan vs Allazov is valid for the Bellator Kickboxing lightweight title; undercard of Patricio Freire vs Daniel Weichel 2 – Bellator 203 – Bellator Kickboxing 10. Watch the video and rate this fight!