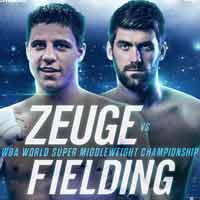 Review by AllTheBestFights.com: 2018-07-14, pretty good finish between Tyron Zeuge and Rocky Fielding: it gets three stars.

The undefeated Wba super-Mw champion Tyron Zeuge entered this fight with a pro record of 22-0-1 (12 knockouts) and he is ranked as the No.10 super middleweight in the world (currently the #1 in this division is George Groves). The only man who stopped him in a draw was Giovanni De Carolis in 2016 (Zeuge vs De Carolis I), after this bout he has won four fights taking revenge on De Carolis (De Carolis vs Zeuge II) and defeating Isaac Ekpo in 2018 (Tyron Zeuge vs Isaac Ekpo 2).
His opponent, Rocky Fielding, has an official boxing record of 26-1-0 (14 knockouts) and he entered as the No.18 in the same weight class. He suffered his only loss when he faced Callum Smith in 2015 (Smith vs Fielding), since then he has won five bouts beating John Ryder, David Brophy (Rocky Fielding vs David Brophy) and Karel Horejsek in his last three. Zeuge vs Fielding is valid for the WBA World super middleweight title (Zeuge’s fourth defense). Watch the video and rate this fight!

(Free embeddable video hosted on Youtube and not uploaded by AllTheBestFights)
https://www.youtube.com/watch?v=mveMEAZyjno