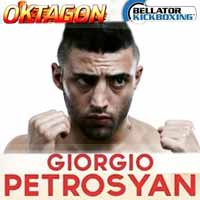 Review by AllTheBestFights.com: 2016-04-16, pretty good fight between Giorgio Petrosyan and Ravy Brunow: it gets three stars.

The former Glory and K-1 World Max champion Giorgio Petrosyan entered this fight with a kickboxing record of 81-2-2 (37 knockouts) and he is ranked as the No.4 super welterweight in the world while his opponent, the WGP champion Ravy Brunow (who replaces Jordan Watson), has an official record of 54-7-0 (23 knockouts). ‘The Doctor’ Petrosyan suffered his second defeat of his career during the semifinal of the Glory lightweight tournament against Andy Ristie in 2013 (=Petrosyan vs Andy Ristie), since then he has won five bouts beating Josh Jauncey (=Petrosyan vs Jauncey) and Jiao Fukai in his last two fights (=Petrosyan vs Fukai). Petrosyan vs Brunow is on the undercard of Patricky Freire vs Edimilson Souza – Bellator 152 – Oktagon 2016. Watch the video and rate this fight!