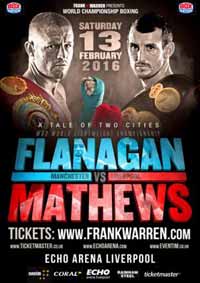 The former Ibf super-Flw champion Zolani Tete entered this fight with a professional record of 22-3-0 (18 KOs=82%) and he is ranked as the No.3 super flyweight in the world (currently the #1 in this division is Naoya Inoue). He suffered his last loss when he faced Roberto Domingo Sosa in 2012 (=Sosa vs Tete), since then he has won six consecutive bouts.
His opponent, Jose Santos Gonzalez, has a boxing record of 22-3-0 (12 knockouts) but he comes off the loss against Mzuvukile Magwaca. Tete vs Santos Gonzalez is valid for the vacant IBF International bantamweight title; undercard of Terry Flanagan vs Derry Mathews 2. Watch the video and rate this fight!