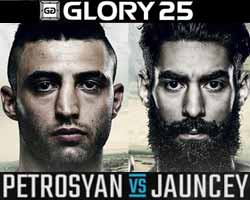 Review by AllTheBestFights.com: 2015-11-06, fight not particularly exciting between Giorgio Petrosyan and Josh Jauncey: it gets two stars.

The former K-1 World Max and Glory champion Giorgio Petrosyan entered this fight with a pro kickboxing record of 79-2-2 (36 knockouts) and he is ranked as the No.5 super welterweight in the world. ‘The Doctor” suffered his second defeat of his career during the semifinal of the Glory lightweight tournament against Andy Ristie in 2013 (=Petrosyan vs Andy Ristie), since then he has fought three times beating Erkan Varol (=Petrosyan vs Varol), Enriko Kehl (=Petrosyan vs Kehl) and Xu Yan (=Petrosyan vs Yan).
His opponent, Josh Jauncey, has a record of 23-5-0 (12 knockouts) and he entered as the No.8 in the same weight class. He has fought three times in 2015 winning over Max Baumert and Djime Coulibaly (=Jauncey vs Coulibaly), but then he lost to Sitthichai Sitsongpeenong (final of the Glory lightweight contender tournament, Sitthichai vs Jauncey). Petrosyan vs Jauncey is on the undercard of Robin van Roosmalen vs Sitthichai Sitsongpeenong – Glory 25. Watch the video and rate this fight!