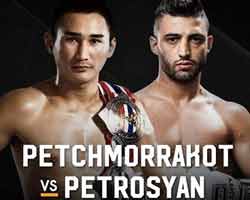 Review by AllTheBestFights.com: 2019-05-17, fight not so exciting between Giorgio Petrosyan and Petchmorakot Petchyindee: it gets two stars.

The former Glory, K-1 World Max, Bellator and current ISKA kickboxing champion Giorgio Petrosyan entered this fight with a pro kickboxing record of 90-2-2 (39 knockouts) and he is ranked as the No.2 super welterweight in the world. ‘The Doctor’ Petrosyan suffered his second defeat of his career during the semifinal of the Glory lightweight tournament against Andy Ristie in 2013 (Petrosyan vs Andy Ristie), since then he has won 14 bouts beating Sorgraw Petchyindee (Giorgio Petrosyan vs Sorgraw Petchyindee) and Atsushi Tamefusa in his last two (Giorgio Petrosyan vs Atsushi Tamefusa).
His opponent, the former Lumpinee Stadium champion in two different weight classes Petchmorakot Petchyindee Academy (also known as Phetmorakot Wor Sangprapai), has a record of 158-34-2 and he entered as the No.4 in the same weight class. He was defeated by Alaverdi Ramazanov last year but then he has beat Liam Harrison and Kenta Yamada. Petrosyan vs Petchmorakot is the quarter-final of the ONE Kickboxing featherweight Grand-Prix tournament and it is on the undercard of Shinya Aoki vs Christian Lee – ONE FC 96. Watch the video and rate this fight!

Their next fight: Giorgio Petrosyan vs Petchmorakot Petchyindee 2