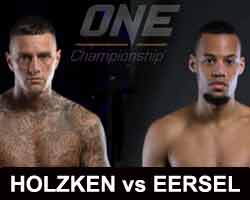 Review by AllTheBestFights.com: 2019-05-17, pretty good fight between Nieky Holzken and Regian Eersel: it gets three stars.

The former Glory Ww champion Nieky Holzken entered this fight with a professional kickboxing record of 92-14-0 (57 knockouts) and he is ranked as the No.6 super middleweight in the world. He lost three consecutive bouts between 2016 and 2017, the last one with Alim Nabiev (Nieky Holzken vs Alim Nabiev) but then he has won over Cosmo Alexandre (Nieky Holzken vs Cosmo Alexandre 2) and Mustapha Haida (Nieky Holzken vs Mustapha Haida).
His opponent, the former Lion Fight super middleweight champ Regian Eersel, has an official record of 53-4-0 and he entered as the No.8 in the same weight class. He was defeated by Matous Kohout in 2016 but since then he has collected 14 victories taking revenge on Kohout in 2017 and beating Anthony Njokuani in 2019. Holzken vs Eersel is valid for the ONE Kickboxing lightweight title and it is on the undercard of Shinya Aoki vs Christian Lee – ONE FC 96. Watch the video and rate this fight!