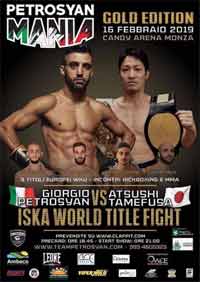 Review by AllTheBestFights.com: 2019-02-16, pretty good fight between Giorgio Petrosyan and Atsushi Tamefusa: it gets three stars.

amateur cam (we hope to find a better quality video)