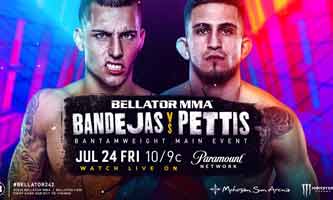 Review by AllTheBestFights.com: 2020-07-24, some good single shots between Sergio Pettis and Ricky Bandejas but it is not enough to get three stars: it gets two.
The black belt in tae-kwon-do and Brazilian jiu-jitsu Sergio Pettis entered this fight with a pro mma record of 19-5-0 (37% finishing rate) and he is ranked as the No.27 bantamweight in the world. He lost two consecutive bouts in 2018, against Jussier Formiga (Jussier Formiga da Silva vs Sergio Pettis) and Rob Font (Sergio Pettis vs Rob Font), but then he has won over Tyson Nam and Alfred Khashakyan.
His opponent, Ricky Bandejas, has a record of 13-3-0 (69% finishing rate) and he entered as the No.73 in the same weight class. He also lost two consecutive fights, against Juan Archuleta and Patrick Mix last year, but then he has beat Ahmet Kayretli and Frans Mlambo. Bandejas vs Pettis is the main event of Bellator 242. Watch the video and rate this fight!