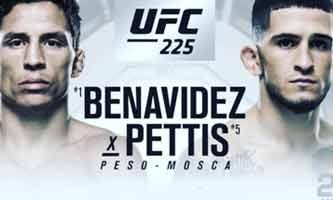 Review by AllTheBestFights.com: 2018-06-09, fight not so exciting between Joseph Benavidez and Sergio Pettis: it gets two stars.

Joseph Benavidez entered this fight with a pro mma record of 25-4-0 (60% finishing rate) but he is not ranked as he hasn’t fought since December 3, 2016 when he defeated Henry Cejudo (Joseph Benavidez vs Henry Cejudo). He suffered his last loss when he faced #1 Demetrious Johnson in their rematch in 2013 (Johnson vs Benavidez 2), since then he has won six consecutive bouts beating also Zach Makovsky in 2016 (Benavidez vs Makovsky).
His opponent, the black belt in tae-kwon-do Sergio Pettis, has a record of 16-3-0 (37% finishing rate) and he entered as the No.6 in the same weight class. He fought three times last year defeating John Moraga (Pettis vs Moraga) and Brandon Moreno (Pettis vs Moreno) but then he lost to Henry Cejudo (Henry Cejudo vs Sergio Pettis). Benavidez vs Pettis is on the undercard of Robert Whittaker vs Yoel Romero 2 – UFC 225. Watch the video and rate this fight!

(Free embeddable video hosted on Youtube and not uploaded by AllTheBestFights)
https://www.youtube.com/watch?v=tGScCNGeG8I